A few days relaxing in Milmerran and getting things sorted ready for a week of Nationals Championship fun.

A club shoot at the Gold Coast Pistol Club found our rifle and Jacks shotgun not working as anticipated for the match. Thanks should be noted to Mad Dog for having a look at it and making some minor adjustments.

Next try out would be when we headed to Dalby with a good turn out of shooters having a practice match and lunch prior to getting out to Chisholm Trail 2014.

We caught up with many known cowboys and cowgirls and a few new faces for this year, well many actually which was fantastic to see!

Although he did turn it into a 'cap gun'! 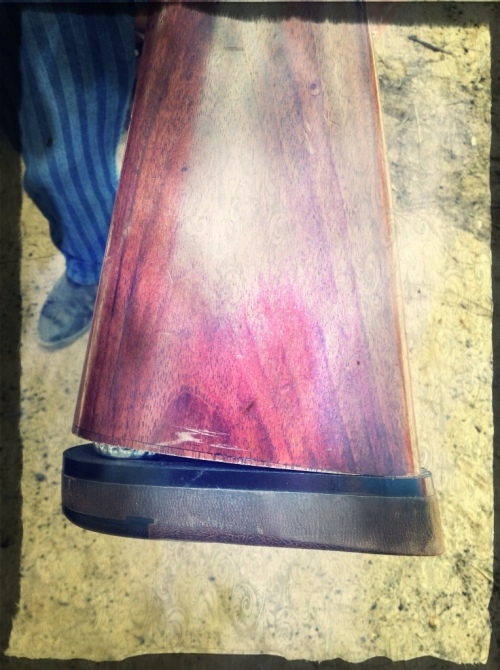 Monday 29th September – more cowboys and cowgirls arriving, I helped out with signing in shooters, giving out packs meeting new and old faces and loving the atmosphere this year more than ever. My little girl also texted and said she passed her next assessment with Defence!! One proud Mummy indeed. 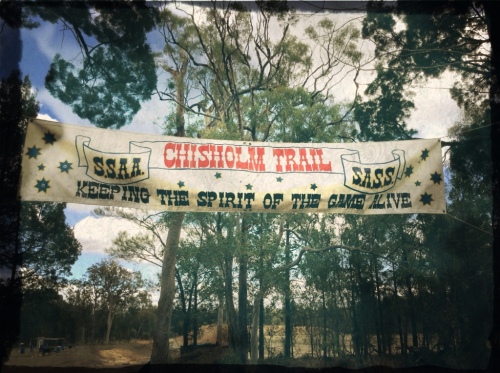 Tuesday 30th September – a Chisholm Trail trip is never complete without Toowoomba Tuesday! Off we headed to Toowoomba for shopping in fabric stores, junk shops and having lunch (with Clancy, Ruby Redsmoke, Myskal, Dangerous Dolly and Luck E Shot)

Wednesday 1st October – The Trappers Birthday! Happy Birthday Trap. We went through about 3 bottles of water chatting on the verandah while Jack and others slept off the previous nights activity. Wednesday was Jack's John Wayne Challenge and afternoon warm up match. 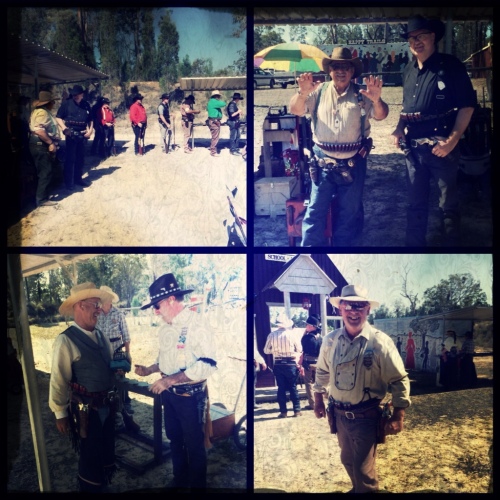 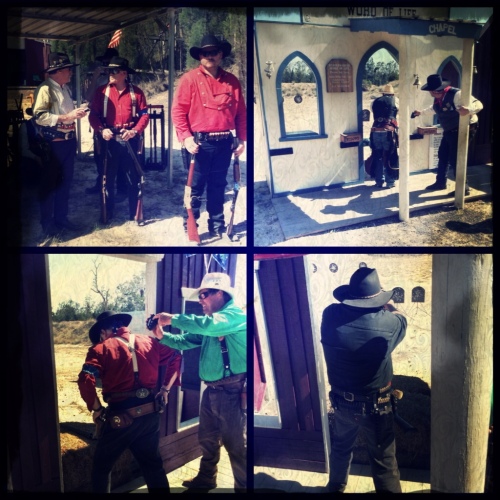 Thursday 2nd October – this morning was the Pat Garrett match and we'd like to thank Bronco Billy for the use of his 30-30. We didn't do that crash hot but had a lot of fun regardless! 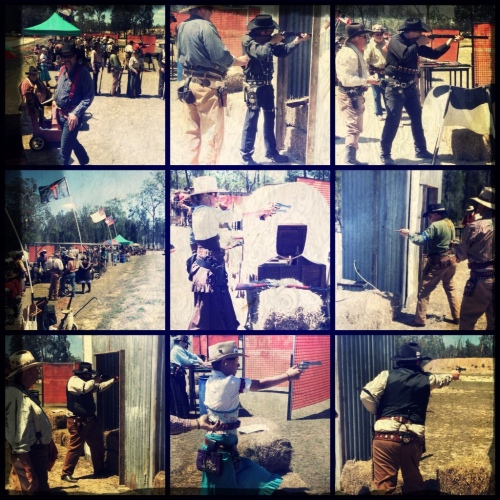 Saloon night!! Poker or Bingo, choose your poison 🙂 Clancy and Amazing Grace run the Bingo while RC Shot runs the poker game. We ran it hard and fast this year with 4 games and prizes. Congratulations to our winners!!

Friday 3rd October – opening Ceremonies for Chisholm Trail 2014 and first day of main match commences, we completed the first 6 stages, a full day finishing round 3.30pm in the afternoon. 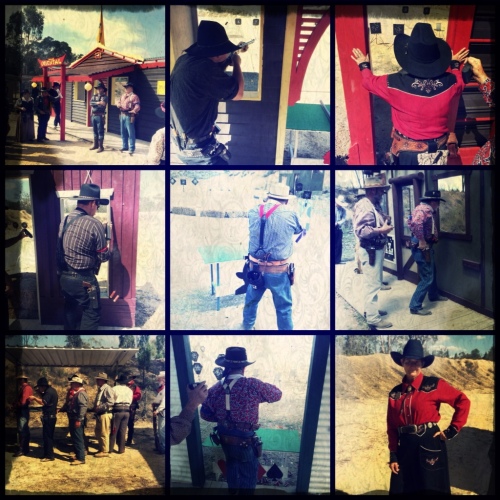 Kick in the Redneck girls roaming around camp, stirring up fun, drinking tequila and freaking the hell out of new shooters! Haa haa haa. 2 choices for dinner, gator and fries or fries and gator – Mary Lou June and Mary Lou July assisted (lol, or hindered!) in the dinner line keeping the crowds calm. 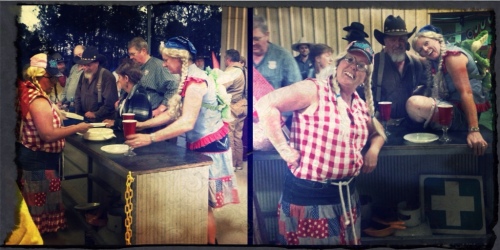 Redneck games ensued afterwards (aka cornhole or horseshoe toss), it went like a well paired Fastdraw Match with our final overall winner being Lily aka Susan Jacobs.

Saturday 4th October – Second day of main match and completing stages 7-12, weather is continuing to be warm and sunny, well what will be will be after today. A few too many misses for the match but will see how it turns out in the wash. 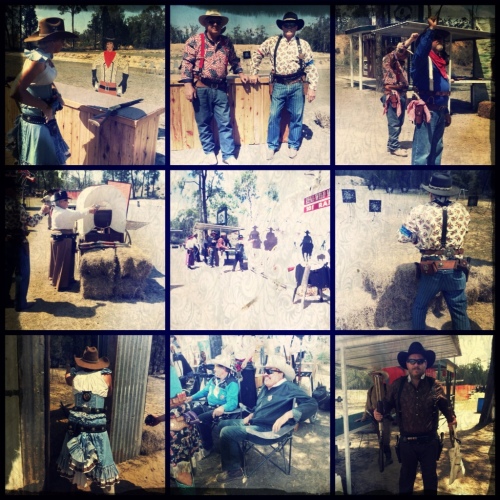 Saturday night banquet and Spanish Grace emerges. Clancy and I check out the costuming for this year and then make a transformation into GI June and July aka Cpl Punishment and Pvt Parts! An eye opener for most I presume who had not experienced Mary Lou June and July before. 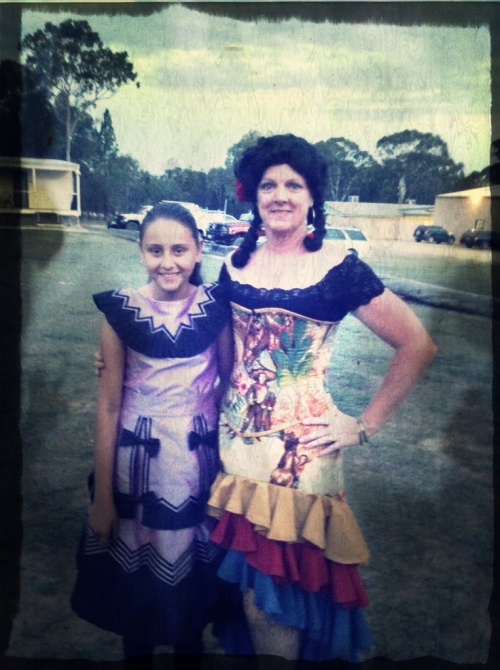 What a blast, costume winners were announced and with the entertainment choices of Juan Marlboro aka Mexican cousin of Marlboro Man the GI's took care of crowd control for the men in black and Johnny Cash, helped pump up the YMCA crowd, the Cupid shuffle, Macarena, and the duck song with the kiddies. Didn't my knees pay for that the next day!! Holly thought it was fun and silly if nothing else. 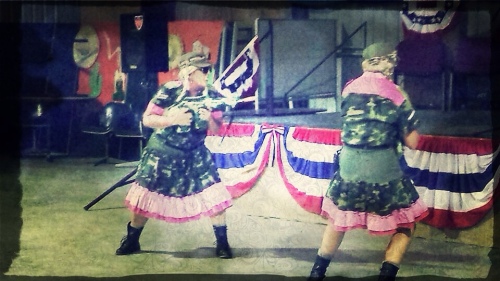 The top 16 men's and Top 8 ladies were announced and festivities continued long into the early hours of the morning (not to mention 'shot glass sports' from the floor!) too funny!!!

Sunday 5th October – it's prize draw morning, saying g'day to all the shooters coming through and heading down to the range for the Shootout! Visitors from the camp oven festival have even turned up from Milmerran to see what the cowboys can do. We went through our eliminations with RC Shot for men's and Jazzi Jess for ladies taking Gunfighter rights for 2014. 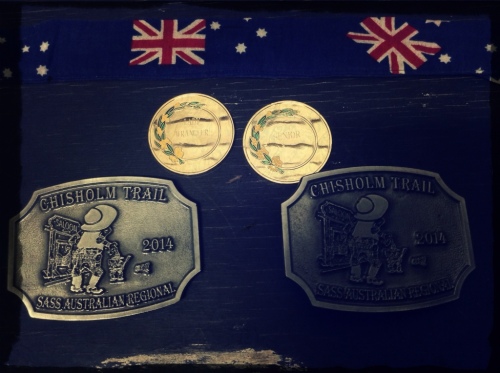 Many goodbyes happened this afternoon and the rest of the hangers on had dinner, conversations and of course the footy finals!

Final goodbyes, laughs, hugs and tears for Monday as we pulled out of camp and Chsiholm Trail 2014 draws to an end.

To all my Aussie, okay – and New Zealand, alright – and the odd couple of American cowboy/cowgirl ring ins, I truly miss you and your company this year, I've had an absolute blast!!