Sunday afternoon following Land Run, Rooster, Constable Nelson and I headed out to the Museum to peruse the many exhibits.

The End Of Trail statue is an awesome welcome as you enter the main foyer, even though we have been before, it still takes my breath away.

At opposite ends you have the marble 'Canyon Princess' to the right wing and 'Abraham Lincoln' seated in the left wing, round towards the banquet hall.

As we had been through Prosperity Junction the last time we chose to hit the major exhibit halls of art, firearms, Indian artefacts, silver screen performers, pioneers, Cowboys, civil war etc.

Prosperity Junction in case you haven't been is a life size old western town built within the walls of the museum. Each building decked out as it would have been in the 1800's.

Our first stop after viewing the black and white photography exhibit was the art hall and quite fitting to our shoot theme for Land Run, was 'Madonna's of the Prairie'.

There were some stunning examples of women in covered wagons, Native American women and children and others by various artists but my favourite would have to be Tom Lovell's 'Target Practice'. Depicting a proud man with his wife in prairie dress and bonnet holding a rifle.

I wanted to tell her to lean into it! Constable said she must have hit the target as the man is looking pleased!

The Tom Lovell and Charlie Russell exhibits were spectacular.

Then it was on through the Indian artefacts of beautiful headdress, fanciful bead worked or embroidered clothing, gauntlet gloves and other items. Could take photos now without flash. Found some gloves for a classic cowgirl ensemble! Think I might have to make my own though. 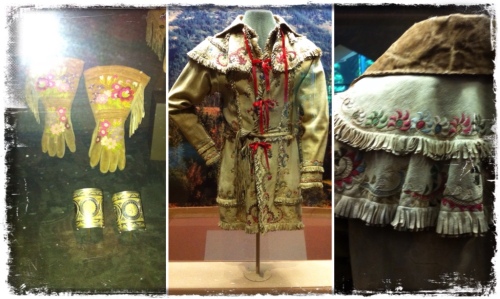 On to the Silver Screen Performers and I love this area. I know we've mostly seen it before whether it be here or other museums but it still interests me. Robert Redfords, Nudie Cohen blinged out purple suit is like the ultimate B-Western attire! Now who needs one of those? Maybe that's what Flat Top Okie needs for the next banquet. 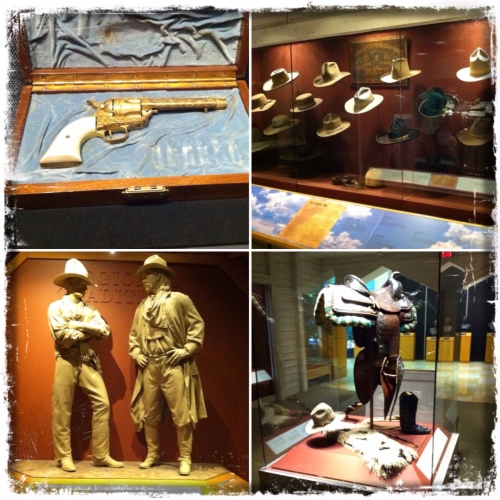 As we moved through we saw the barbwire and brand room. Bronco and rodeo performers, civil war and vaquero's. Have found new designs to consider for Dutch Henry and Trail Rider's suits now.

From there we went outside and wandered through the gardens and couldn't help ourselves, we had to go through the Children's Cowboy Corral which was pretty cool actually. Back outside we attempted selfies and tried to avoid the attacking goose that we had seen chasing a child just minutes before. 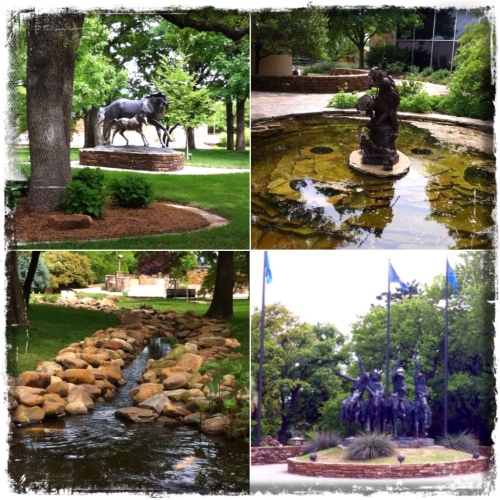 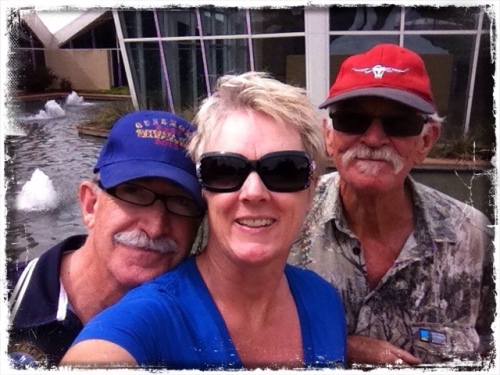 If you ever come visit us or go to Land Run or the Southwest Regional be sure to allow an extra day to fully view this Museum. It is one of my all time favourites.