Whilst in Denver for a day I took it upon myself to see what we could find to visit. Something new and different as we like to do when passing through different places.

This time I chose The Molly Brown House. A 120year old Victorian home on Pennsylvania Street, a stones throw from the Capitol.

Do you remember your Titanic history or the movie at the very least?

The Unsinkable Molly Brown, she became better known as, after she passed away. Margaret “Molly” Brown was so much more when you learn about her life.

If you go by what the movie says and you look at how she came to be rich, indeed “Molly” was of new money. (Not inherited family money).

She was from very humble beginnings of Irish immigrants. Working in a cigar making factory at age 18, her brother who had been mining in Leadville, CO sent her a train ticket and basically told her to get on it, come out and marry someone rich! At age 19, courted by one of the least wealthy men out there Margaret married J J Brown.

Luck however was soon to change! Whilst mining for silver, the finding of a large vein of gold and some copper took them from middle to high class overnight.

Now let's skip back to the Titanic bit. When we entered the back part of he house at the start of the tour, the whole “Molly” Brown and the Titanic was visited.

She had boarded the Titanic, on JJ's advice, to go back to the UK as a grandson had fallen ill.

Whilst on the White Star Line's impressive ship when the iceberg incident occurred, Margaret was quick to get on deck to find out what was going on. Staff advised her to go back to her cabin and that everything was okay.

Knowing what catastrophes could happen with mining, the quick thinking Margaret put on about 12 layers of clothing, shoved money into her pockets and disregarding the advice to stay in her state room, went to help others.

Of course by this time it was evident the ship was going down. “Molly” using her 5 different languages, assisted many immigrants with finding their way out and getting them into life boats. She almost didn't make it off until someone man-handled her, threw her into the life raft and had it lowered down.

Still thinking of others, Molly gave some of her clothing to other women in the boat who wore only night dresses and ordered them to row to keep warm.

Once back on dry land she was instrumental in helping immigrants get word back to their relatives that they had survived. Helped get them reestablished and assisted others with insurance claims.

…..skip forward or in reverse. Margaret “Molly” Brown even went up against the Rockefeller's in gaining rights for miners. She was influential in socialist reform for Denver – schooling, public bathrooms, parks etc. Womens rights were also high on the agenda and she loved self education. She would even let her servants sit in on her tutorials. She ran for senate 3 times, drove an ambulance for the Red Cross during World War I and helped found the juvenile court system (damn good thing as it meant 4 year olds for stealing could be kept separate from murderous criminals).

Despite rumours that Molly was not allowed in society, she had driven most of it and was only barred from one so called societal organisation.

Now let's get back to the house! This home was purchased by the Browns in 1894. Architecturally designed by William A Lang, it was purchased from Isaac and Mary Large for $30,000.

Photo: down left hand side of house from the back.

Skip forward again and after years of changes, made into a dormitory, falling in to disrepair and almost being knocked down for a car park! The house was saved by a group of historians and bought for a mere $5,000.

The house over the time has been lovingly restored – to my surprise and I guess to a historians absolute dream – Margaret had photographed and documented every detail of every room, and they have been able to restore much of it back to the original ceilings, colours, tapestries, crown mouldings etc.

Some pieces are original to the home but most are the same style that would have been used then.

Photo: restoration of tile work on the front verandah entrance.

So coming in from the back verandah area, the first room was JJs office that flows into a gorgeous library and music room. Beautiful lace curtains over a 3 bay window, ornately trimmed in timbers throughout. The bookshelves are beautiful with glass front covers. Items from overseas trips, a piano and reading chairs for this room.

Through to the right we entered the dining hall with its ornate artistic conservatory ceilings with palm trees in pinks and green edging (uncovered during restoration). The furniture is very ornate carved timber. Painted and textured dado walls.

Another gorgeous dress in layered lace fabrics from soft shell colours through to pink's and burgundy. A 1910 Edwardian dinner dress.

The Belgium tapestry was a huge piece that she had cut in half and mirrored and framed split on the wall to allow for a beautiful cabinet to display her glassware.

Into the left, the main entrance hall is richly embellished with anaglypta paper – looks like pressed tin – on the walls and the ceiling. It was painted gold to pay homage to their coming to money. The entrance has the only original light fixture in the house.

There is Turkish influence in the front room from her visits to Turkey. The original statues, retrieved from antique stores, held trays so if no one was home they could leave a calling card. I like that old style notion.

Besides the home being one of the first to have electricity, central heating and plumbing. They also had the first phone.

Photo: side window, can't see the stained glass properly, this is in the stairway first floor to second.

The formal parlour held the most expensive items where visitors were entertained, if you were 14years old you could enter the room and would play piano or recite poetry to show how well rounded you were and your suitability for suitors.

The ornate timber railing leading to the upstairs is all original to the house.

The second floor and sunroom are again all lined in the gold painted paper. Beautiful stained glass windows held a view to the Rocky Mountains no longer seen due to the buildings in the city now. There was also a small balcony that Margaret would have a band play for her visitors. 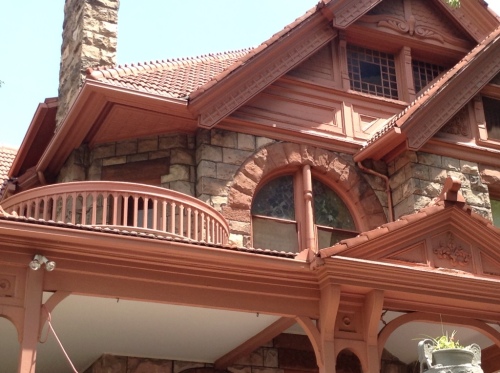 Photo: the arch windows were the sitting room and the small balcony to the left is where the band would play.

Servants quarters were on the third floor and a room used for women's suffrage gatherings etc. not open to the public as yet.

The first bedroom was the daughters, the bed is original to the home.

The second green bedroom was Margarets. Across the hall was JJs bedroom.

The other room to the right was her parents room and the last room was the son's bedroom.

The bathroom is still all original.

Down the servants stairs, very narrow and not much wider than my shoulders. Servants, like children in that era, should be seen not heard. If you went up you carried stuff up and if coming down you would bring down laundry or tea trays etc.

There was no railing and therefore they were narrow to use your elbows to stabilise yourself.

An 1889 annunciation exists in the kitchen, the bell would go, an arrow would point up to indicate which room required a servant.

The kitchen has been done as a 1910 kitchen, the butlers pantry just off the kitchen also has a door into the dining room. Beautiful cabinets exist in the butlers pantry and also a hidden canned and appliance pantry like those of today that are now coming in to many homes.

That my friends concludes the hurried note taking of The Molly Brown House visit. My mind or imagination goes wild when in these places, picturing the dress, entertaining visitors, the gatherings with servants for tutorials, Christmas but I'm sure it wasn't all roses! 😉

P.S. We had brunch at City Bakery and Cafe beforehand, divine toasted panini sandwiches and cibbati bread that we were given for first time visit. Fabulous food, coffee and baked goods, worth a visit, Sandy was very friendly!