The Anheuser-Busch Brewery, in other words Budweiser! Amongst other brands they produce or own.

What a way to finish off the afternoon, arriving into St Louis, Missouri and taking the 4.10pm tour of the Anheuser-Busch Brewery, in the historic Soulard area.

We booked the Day Fresh Tour that takes you on the 'Seed to Sip' with other bits in between. Visiting the Clydesdale paddock and stables, the beechwood aging cellar, the historic Brewhouse and the packaging facility. 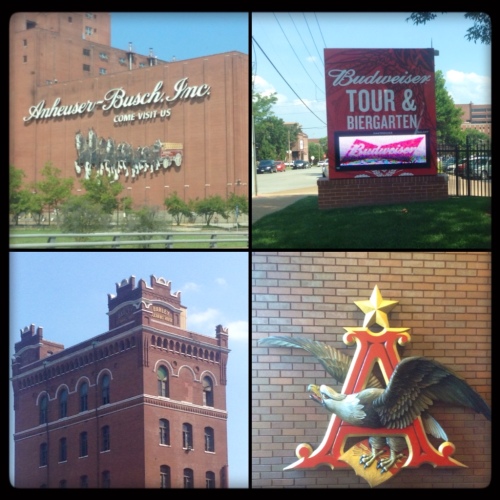 Upon arrival, where would we be without a visit to the Biergarten while waiting for the tour to start?! I chose to sample the Blue Point, Toasted Lager and Jack the Hoegaarden (the lighter coloured one)

The Budweiser horse team consists of 70 Clydesdales, 50 of which are located here at St. Louis. Grants Farm, just a short distance away, is where the Clydesdales are raised. They eat around 20-25 quarts of grain feed a day but I think he's had a bit too much beer today!

Into the stables we go, an old building trimmed in red and green against the beautiful red brick exterior with its stained glass windows.

It takes about 5 hours to prepare the hitch for parades etc. and they first performed in 1933. 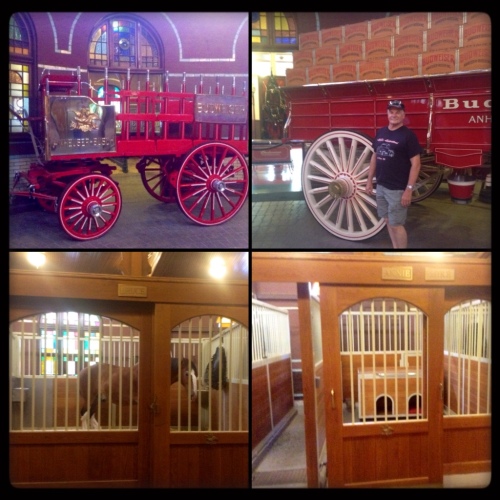 The Dalmatians were introduced in the 1950's to protect the deliveries on the hitches.

The beautiful chandelier, all 600 pounds of brass was installed after being acquired at the 1904 World Fair.

The smaller stalls are original to the beautiful 1885 building. I am blown away and we are only on the first stop of the tour.

Next we headed to the aging cellars. A pleasant to cool 50F/ all year round.

Beechwood chips are procured from the local areas, cooked up to remove any other flavours and then used 3 times over before removing, washing and mulching.

These aging tanks, if you drink a beer every 24 hrs would take you 137years to drink one tank. 1.2 billion 12oz beers per tank!

On to the process – Barley, rice, hops, water and yeast. Your 5 main ingredients to making a bud!

The rice gives the beer the crisp clear colour we see in our first sample for the tour.

The recipe today is the same as it was in 1867, in particular the yeast recipe, guarded with only 5 individuals having knowledge of its full potential.

To give you an idea of beer strengths, Bud Light stays in the mashing process for about 4 hours where normal Bud is only in for 2 hours. This is the process of breaking down the carbs and sugars, more calories in the short, less in the longer process obviously.

Next was up to the third floor of the brew house. Oh my god, the chandeliers, tiled artwork and architecture in here are exquisite! The 3 storey chandelier is all hops flowers.

During the prohibition era, the 'elephant' atop the pillar, was actually the logo for their yeast product on the back there was a warning about what not to use it with and how not to brew beer. Lol! During the prohibition time, to keep the company running they produced everything from barley malt syrup, bakers yeast, soda to ice cream! In fact 20 different products kept their company running during that time.

'Bevo' the fox featured on all 4 corners of the packaging warehouse is based on the fox from Grimms fairytale, who always knew where to find good food and drink at all times!

Up to the 3rd floor of the packaging warehouse. After rinsing and sterilising, the bottles are filled within 1/10th of a second to ensure purity and crispness to each.

At 24 beers per case, all cases are sent down to Mississippi River for storage. Housing half a million cases at any one time, say production was stopped and STILL, it would only take the whole Mid West to drink the whole warehouse dry in a mere 18hrs! 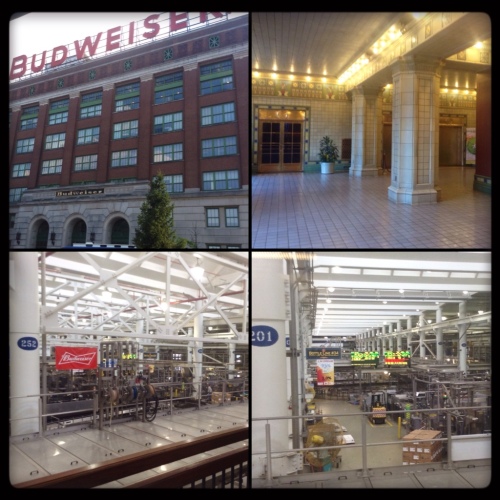 At the conclusion of the tour we received the freshest bottle of beer you'll ever get, bottled this morning around 3am! Room temp at moment so needs to go in the fridge.

Two free beers on tour plus a free ticket for a 16oz beer in the beirgarten after.

Luke and Allie were our tour guides. On their summer break this was their first year of tours, rotating between the different tours and the gift shop. If you're over 21 they can work the bar as well. They were sensational! What a job, 4 days a week, I think I could handle that easily! Although you wouldnt get any samples!

$10 bucks, holy hell, was so worth it! If you are ever in St.Louis, you really must do this tour!