Not only is Hell On Wheels my all time favourite series, it has the perfect eye candy both in actors and costumes!

Three costumes were at the National Cowboy Museum and Hall of Fame during Land Run (that we missed this year due to Jack's health). So I hope you had a chance to pass your eyes over Thomas Durant, Cullen Bohannon and Eva Toole's outfits during that time.

As AMC has won 3 years running at the Western Heritage Awards and have an exceptional relationship with the Cowboy Museum, they offered up a short two month exhibition. It's just a shame it's not there for just one more week when 300 Cowboys will be gracing the halls of the Museum for the Red Dirt Rampage banquet.

The Hell on Wheels exhibit features 7 costumes from the series, along with maps, books and railway tools generously loaned from the Oklahoma Railroad Museum. There are two televisions with film showing how the series was made and other historic information. A well displayed exhibit in the main entry hall to the rest of the exhibit halls.

First up we have costumes of Collis Huntington (played by Tim Guinee) and Thomas Durant (played by Colm Meaney). I now have new gear to make for Jack but it's about time we jazzed him up a bit more. Looking forward to it!

Of course it wouldn't be an exhibit without Cullen Bohannon's signature wardrobe! (played by the handsome Anson Mount) I need to speak to fellow cowboy shooter Cullen Bohannon about this! 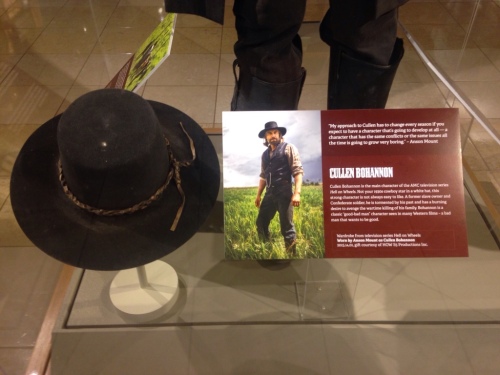 Next, the beautiful Eva Toole's (played by Robin McLeavy) jade, burgundy and gold outfit worn towards the end of Season 4 and the first half of Season 5. This one is also earmarked for a fellow cowgirl shooter. I must say my heart did sink a little not being able to see the exquisite blue one she wears in the second half of Season 5 – THAT will be mine I feel. 😉

The railroad was not built without help and this meant a good mix of African American (freed men/emancipated slaves), Chinese (migrants working hard for a better life) and of course the larrikin Irish (also migrants escaping the potato famine mostly) The costumes of Elam Ferguson (played by Common), Tao (played by Tzi Ma, costume worn by an extra) and the ever loving, whiskey drinking, up for a fight, bartender Mickey McGinnes (played by Phil Burke, costume worn by an extra) were also on display. 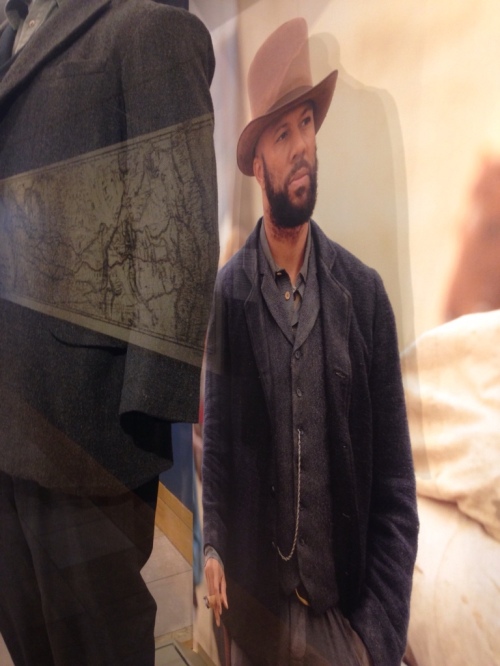 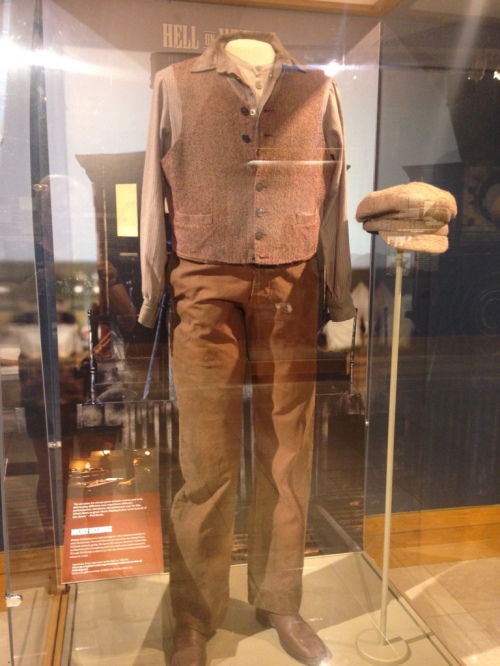 I've talked about railways before but it is just totally mind blowing, to fathom just how they made it, in the conditions and landscape they had to endure during that time period. This map had printed on the back fares for different routes and steamer passage to the Far East including New Zealand and Australia!

It was a romantic notion that East meet West and the engineering marvels, competitive railway companies, along with both individual and government backing, made this happen. The completion of the railroad in that day and age was the equivalent of man landing on the moon!

The trials and tribulations of both the Union Pacific and Central Pacific railway companies were brilliantly brought to light in AMC's five seasons of Hell On Wheels. I for one was sorry to see it end. We have watched up to Season 4 twice, relived Season 5 prior to the second half being released this year and I look forward to watching it all again! 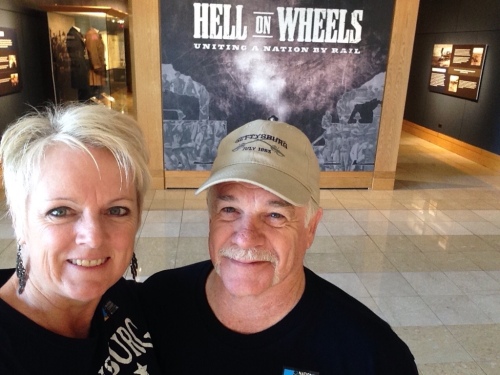