After spending two thirds of today stressing about a shipping issue I finally settled in to something fun and interesting just before beer o'clock came round.

Then sitting down with Jack and a few beers, working out how much money I could have won solving 80% of wheel of fortune puzzles tonight, we had pizza and a couple more drinks.

What rubbish on tv comes across the screen as we decide on the iconic Easy Rider for our viewing pleasure, only to get past some of the scenery and realise that we've seen enough and move on to Netflix. Now I can handle watching Scott Eastwood (Clint Eastwood's son) any day but Mercury Plains was a little different. I can say however, that there was some very good cinematic scenery I enjoyed.

While I lasted out til the end of the film and flicked over to watch the latter part of Angel and The Badman (John Wayne western) the other half spent a good hour watching through the back of his eyelids! Lol! 🙂

In the meantime as day's end draws nigh I feel like I have achieved something today during the ad breaks having mostly completed a gorgeous yellow poppy corset for Double A. 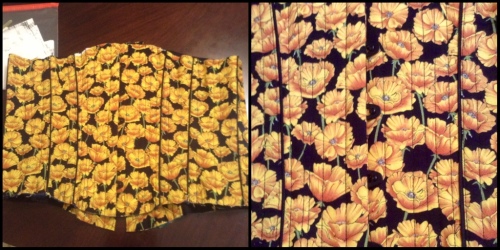 Tomorrow I'll get to finishing it, get some shamrocks with swing arm busk done and get back on to all things Texas.

Have a great weekend!