Tuesday we hit the road travelling through Oklahoma, Arkansas, Tennessee and into Mississippi. We made an overnight stop at Olive Branch and today are hitting the road for Georgia.

As Elvis crooned across our airwaves yesterday Jack said we would make a stop at Tupelo to Elvis' birthplace and Museum. Yippee!

This morning we made the stop in Tupelo, Mississippi to visit the Museum. No photos are allowed in the Museum which features times during the Depression when times were tough for Vernon and Gladys Presley. There are many photos, memorabilia, clothing worn by Elvis and more.

The small church Elvis and his family attended was a block over on Adams Street. When the church needed to build a larger facility it was used as a house and later purchased by the Museum in 2008 and relocated here to its current site on the house and Museum grounds.

He grew up with the church services and the gospel sounds that would set Elvis on a path of music, beyond the weekly gatherings around the radio listening to the Grand Old Opry.

It was Reverend Frank Smith who taught a young and shy Elvis a few guitar chords. He was encouraged to perform during services, often with his parents. The Reverend would walk and play which statements attribute this to Elvis performance style.

Also noted in the Museum was that Elvis used to entertain himself with simple toys and Captain Marvel, Jr comics. Speculation maybe? They also suggest his signature hairstyle and perhaps the TCB (taking care of business) lightning bolt could have been attributed to these comics.

In 1938, the family lost their house when Vernon was sent to prison for forging a check (cheque) where he served 8 months of a 3 year sentence. Gladys would work to keep food on the table.

As Elvis continued school, taking his guitar with him at times performed for friends. His teacher entered him in a state contest where he placed 5th.

In 1948 the Presley's moved to Memphis. This became a turning point in Elvis' career where he began performing with other boys who played music. He still had the intention of being part of a Gospel quartet.

In 1953, he paid $3.95 to make his first recording 'My Happiness' and 'That's When The Heartache Begins'. Then if you have ever done a Sun Studio's tour in Tennessee, we all now what happened after that and how Marion Kesker had saved the recording and later Sam Phillips produced many of Elvis' recordings.

The grounds to the Museum are spectacular with plaques of information during the years of pivotal moments, a bronze statue depicting a young Elvis in oversized overalls and a meandering walk both wheelchair accessible by way of ramps and paths or stairs to the top of the property to another statue called 'Becoming'.

This stunning statue shows a small Elvis and as a mature, larger than life flamboyant style as he had become.

Onwards and we cross into another state we have not visited – Alabama. We will pass the Talladega Super Speedway. Now comes to mind, besides NASCAR races of course, is Talladega Nights – Ricky Bobby, shake and bake – a very funny movie. We will make a stop here on the return trip to the Motorsports Speedway Museum and Hall of Fame!

From Alabama winding through the Talladega National Forest, we continued East heading across the border into Georgia. 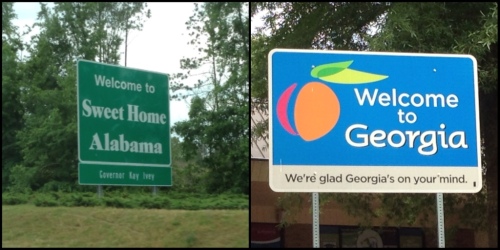 We found the range, then the hotel and we are ready for an early start tomorrow. We missed the registration as we forgot we would lose an hour!