The Plum Creek Shooting Society hosted the Battle of Plum Creek – Bullets and Rails 2018 this weekend at the Comanche Country Ranch owned by landowners Lyman and Nancy who have kept it running as an outstanding cowboy range facility.

This year the shoot is based on famous train scenes in western movies with even a silent movie start in the Livery.

After much rain in previous weeks, it appears the range has been mostly spared and the ground is soft under foot but not boggy.

Day 1 was Wild Bunch and side matches which went off in fine sunny weather.

Day 2 rolls around with a clear cool start and more sunshine expected to continue. The mornings proceedings start with welcomes, pledge of allegiance, pledge to Texas, prayers and 'Patience'. Patience is a cannon but I couldn't tell you the details of her magnificence but if you asked her caretaker, Artiman, I bet you he could tell you more than a story or two. 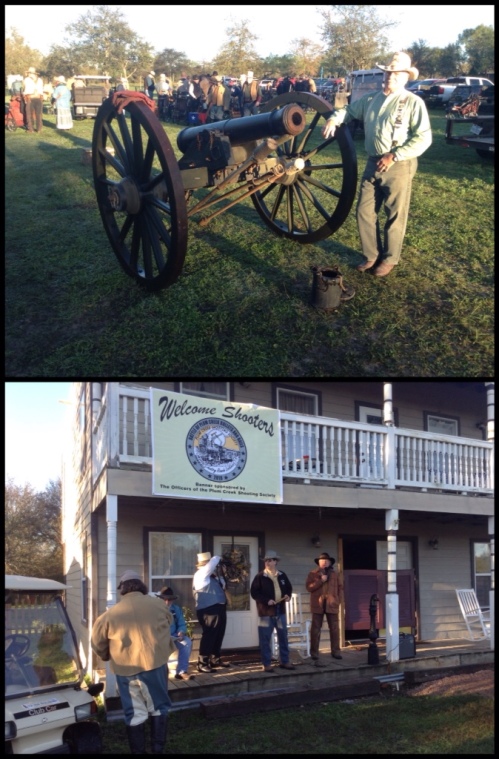 Under the intricate instruction of Artimans artillery commands he and his fellow cowboys, come recruits get Patience ready for action. (You have to go to the Facebook page to see her in action). Now ready for firing, me holding iPad to video, I realise I don't have earplugs and only the capability to plug one ear hole, well….you can see by the video, that I still was not expecting the result! My ears were ringing for a good while! 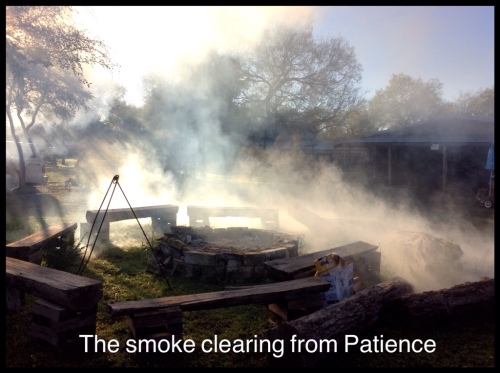 We all moved off to our respective start stages for Day 1 of the Main Match and commenced stages 2-7 with our posse of Texas Ghost, Lady Ghost, Oklahoma Dee, Kansas City Sneed, Lefty Wheeler, Krazy Legs Kay, Texas Drifter, Chisos, Red River Raider (and the ever spectacularly dressed Petticoat Parker), G W Ketchum (thanks Suzie for keeping score all weekend), Six Goin South, Kickshot, Jack and myself.

Last night was the banquet and I assisted Six Goin South and Lorilei Longshot with a costume contest in the Parlour House Reception whilst men gathered in the Saloon next door. Congratulations to all who attended and placed. 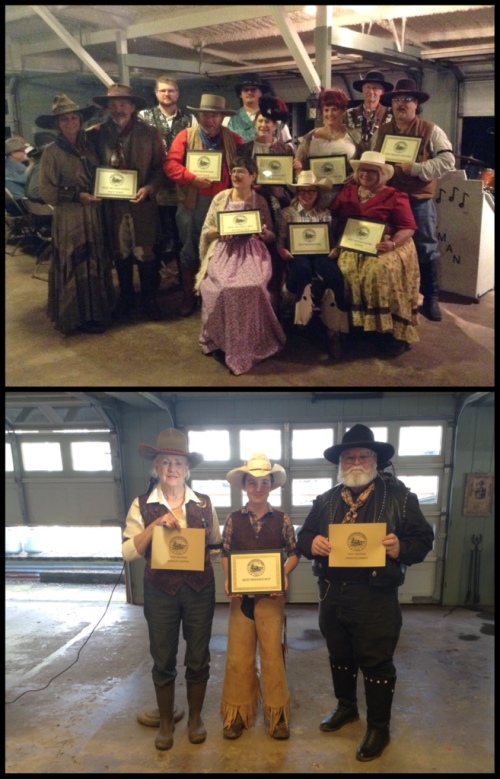 Side match awards were given. A neat train whistle, theme appropriate for the shoot. I walked away with 4 so I may share with Jack if he wants to play trains! Haa haa haa! 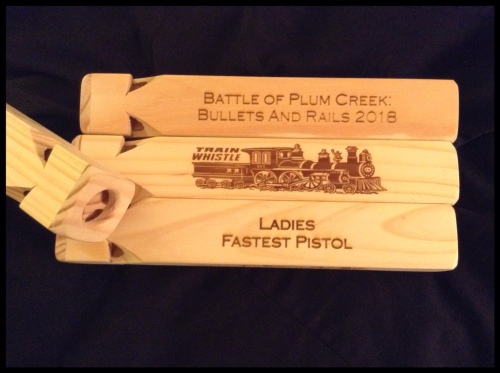 Thanks Lyman for putting together your band and playing too. Music was great!!

Day 2 of the Main Match and we are set to finish stages 8, 9, 10 and 1. We had thunderstorms last night and the range has seen a massive downpour that has created better environments for pigs! Lol!

It is boggy as but the match officials are hurriedly running around clearing water and laying bags of sawdust as best they can, After a delay, we started at 9.15am to finish the match.

Lunch was on – fajitas – and might I just say the lunches and dinner the crew put on the whole weekend was outstanding especially lunch today. Awesome job and it was very much appreciated.

Awards got under way and the prizes were railroad spikes. Not just any old railway spikes I might add, these are the real deal. Actual 1800's railway spikes from Texas railroads. 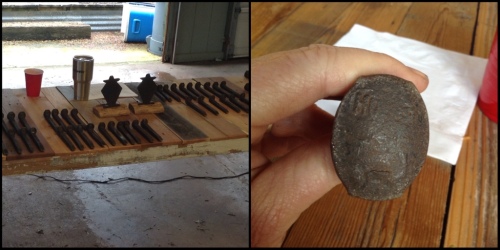 Joe Darter gave a little trivia behind them before they started the awards. He 'acquired' these from somebody he knew that had connections. All the spikes are uniquely marked and highly collectible. The makers of the spikes would mark their initials or other carvings into them. If you were injured during other railway work back then, you usually ended up with one of these jobs also. All these spikes are marked, engraved with the shoot name and some with Champion on them.

Special awards made by Two Spurs and in keeping with the railway theme were given to our, shall we say, more mature cowboy and cowgirl at the match. Cherokee Clay and Lady Ghost received these awards for 'Most Train Rides'. Such a neat idea. 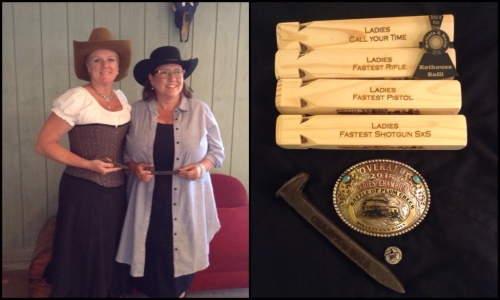 There were 16 clean match winners from 203 shooters for the match. I had a clean match!

Congratulations to Oklahoma Dee 1st man overall and I won ladies overall AND finished 2nd place in the match right behind him!

Thanks to all the crew at Plum Creek Shooting Society once again for a great match.

As we headed towards Tamworth this morning, I quietly ponder the differences between bushranger's and outlaws and come to the conclusion that our two worlds were very much the same.

I was looking at the landscape as we left Gunnedah and wondered what a god forsaken place it would have been back in the mid 1800's. Dirt, scrub, gumtrees and a whole lot of nothing in between.

Settlers would have made their way west of the coast over escarpments such as Gibraltar Range and the Great Dividing Range after explorers had deemed possible good land on the other side.

Stage coaches did run through areas of Australia just as it was the preferred mode of transport in America. Covered wagons? That I don't know but I'm sure there would have been some type of wagon or drays driven by horses or oxen into lands unknown.

Bushranger's here were just as varied as American outlaws, running on their own, in gangs, robbing stage coaches, horse stealing, cattle rustling and more. Was it out of necessity? Boredom maybe or revenge?

Whatever the case may be they kept Troopers on the run looking for them just as the Pinkertons were doing in America. Wanted posters went up and rewards were also offered.

Let's have a quick look at some of our Australian Bushranger's.

Ben Hall – (1837-1865) Hall and his associates carried out raids across Bathurst to Forbes, south to Gundagai and east to Goulburn. He was probably one of the gentler bushranger's of the time as he was not directly responsible for any deaths unlike several of his associates. 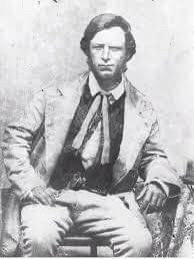 Ben turned to bush ranging after his wife and son left him. He was said to be a bushranger after being sighted with notorious Frank Christie (alias Gardiner) during a robbery. Later Gardiner, Hall and others robbed the gold escort coach of banknotes and 2700 ounces of gold.

Ben escaped conviction a couple of times and in the meantime lost his property and wandered the countryside drifting into a life of crime.

Ben and his gangs most notable, or one that I care to write about, was the bailing up of Robinson's Hotel in Canowindra, NSW. Where towns folk were kept hostage but given food and entertainment. The policeman was locked in his own jail cell for humiliation and when the hostages were finally released the gang insisted on paying the hotelier and compensating the townspeople 'expenses'.

Ben Hall was shot at Billabong Creek in 1865 supposedly under the protection of the Felons Apprehension Act 1865 which allowed any bushranger specifically named under the Act to be shot and killed by any person at anytime without warning. Although there was still controversy over Hall's death that the Act had not yet come into force.

Andrew George Scott 'Captain Moonlite' – (1842-1880) an Irish-born Australian bushranger. He was accused of disguising himself and forcing a bank agent he had befriended to open the bank safe. The agent described being robbed by a fantastic black-crepe masked figure who forced him to sign a note absolving him of any role in the crime. 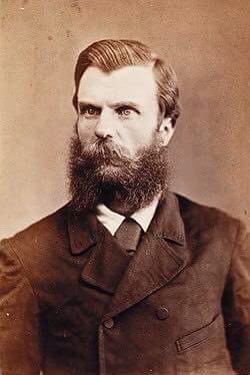 The bank agent said it sounded like Scott but no gold was found in his possession. Moonlite managed to turn it around onto the agent and a local school teacher who became the principal suspects in the minds of police.

Moonlite stayed elusive for a while buying horses, a groom and maintaining a gentleman's life. He was eventually convicted for obtaining money by false pretences. After serving two sentences for that he was arrested for robbing the Egerton Bank and sent to Ballarat.

He succeeded in escaping gaol by cutting a hole through the wall of his cell. With another prisoner they seized the warden, gagged him, got his keys and let out four others before escaping over the prison wall. He was recaptured and after 8 days of self representation he was finally convicted and sentenced to 10 years hard labour of which he only served two thirds the sentence.

Frank Wordsworth 'Captain Thunderbolt' Ward – (1835-1870) renowned for escaping from Cockatoo Island and for his reputation as the “gentleman bushranger”. He is said to be the longest roaming bushranger in Australian history.

Thunderbolt robbed the Rutherford toll-bar in 1863. Robbed mailmen, travellers, inns, stores and stations across Northern NSW and some parts of QLD. With 3 others, he then went on a crime spree in 1865 but that was soon disbanded after one was shot and captured near Moree.

Later the same year he got together with two other felons but the second gang also disbanded after one of them shot a policeman.

His next gang he only had younger accomplices that would do as he said. After one of them left, Thunderbolt stayed hidden, surfacing to do the occasional robberies. There is a cave named after him in the region he hid out near Uralla. He was shot and killed by a Constable Walker.

Edward 'Ned' Kelly – (1855-1880) of Irish descent, a bushranger, outlaw, gang leader and convicted police murderer. One of the last bushranger's and by far the most famous. Ned wore bulletproof armour during his final shootout with troopers in Victoria.

Ned came from a poor family whose father had died when Ned was only 12. Third of 8 children, eldest male in the family. The family had gripes with authority. Ned was first arrested for associating with another bushranger Harry Power (Ned's bush ranging mentor) and served two prison terms for various offences, the longest being for receiving a stolen horse.

The Victorian Government proclaimed Ned, his brother Dan, Steve Hart and Joe Byrne to be outlaws after shooting three policemen dead. An act of revenge for the imprisonment of Ned's mother.

The Kelly gang crime spree included armed bank robberies, killing a sympathiser turned informer and stealing. The final showdown in 1880 after a failed attempt at derailing a police train, the gang dressed in armour had a gun battle with police. Ned injured was the only one of the gang left and was eventually tried, convicted and sentenced to hanging.

Ned Kelly is now a cultural icon in Australian folklore.

Bushrangers were those who had abandoned social rights and privileges, taking up 'robbery under arms' as a way of life. All in all, there were some 2000 bushranger's who had thrived during the gold rush years and indeed for almost a full century.

Now we are out of the ranges, trees and rocky outcrops back on the coast and my mind wanders to other things.

So in the final words of Ned Kelly, a famous saying now – “such is life”